Nalbinding - because we don't have enough going on...

I don't believe I've had the singular joy of rattling on about the joys of an ancient Viking art form that requires taking a single needle, a handful of yarn, and making something to wear with it - while NOT being crochet.
I know. Crochet is kind of the only thing that uses one stick, right? I thought so too... until I stumbled across a beautifully worked hat done in a fashion I'd never seen before.
Now normally this is where I would set out a photo of the thing I saw. Honestly, I've looked at so many examples and so many styles since then there's just no way whatsoever that I could find that object. This is not important, however. What IS important was that moment of discovery, the spark of inquiry that resulted. I was immediately hooked (pardon the crochet pun) and had to burrow in to all the info I could get. Immediately.
Unfortunately, unlike a lot of previous attempts at makin' learnin', it turns out that not too many people do nalbinding. Of those people that do, a LOT of them don't speak English, or else just don't feel inclined to translate their web pages in to English from Finnish, Swedish, Danish, Norwegian, Icelandic... it has largely survived thanks to the efforts of the Viking's proud descendants, who saw what their relatives were doing with a chunk of wood that had a hole in it and a whole lotta thread and thought "I have GOT to get on that bandwagon."
Apparently nalbinding predates knitting, crochet, most other methods of garment creation by a few thousand years. It would seem this is true, because they even have archaeological digs to back this up. Even cooler -and what tugs at the inner science-geek for me- is that most of the stitches are named after the dig sites the samples were unearthed at.
Now, to go this long without showing you an example is a bit silly because a lot of you are probably thinking "dear god, how many other ways to wrap yarn around itself ARE there?"
Well... this is one:

And this is where I get a bit smarmy and say with some sort of assumed knowledge that I do believe that's the Oslo stitch, done in many different types of yarn/thread/whatever that shiny stuff is.
To say that it is addictive is like saying that chocolate is a good idea to give to a woman...obvious. If you watch anybody that does it, it should be obvious they love doing it. This, and the plethora of videos on YouTube on the subject should be enough to convince anybody that those that know how to do the craft, love the craft.
Generally speaking, wool is used... the good stuff, the grungy stuff ripe with bits of straw and lanolin almost oozing off of it is best, and handspun makes a lovely presentation because it is already a lacy-looking stitch to begin with. It will show off the texture of handspun beautifully in whatever it's worked with.
Now, the tools are also ridiculously simple. You need, first and foremost, yarn. Wool yarn, although some say that silk is allowable based on some historical findings. You will also find that people that do this take pride in the historical nature of the craft and therefore are kind of hardass about sticking with tradition. That being said, acrylic would be an utter failure with this craft as the means to join the yarn when you've run out of "live" yarn to work with won't function and nobody wants to weave in that many ends.
So yes. You need... yarn. And you need your "nal" - or "nadel", "naal", or "needle" as we call them these days. And then you work some loops and you end up with something that's pretty epic looking.

This, btw, is not my work, and neither was the first. Credit, ALWAYS, where it is due. :)
As you can see, it's a series of loops laced through one another, and the end result, depending on how thick or how thin the yarn is, can look like anything from lace to a serious, solid piece of fabric. Based on what I've seen, the most popular things to create with them are hats, socks and mittens. Which is basically the same as what knitters and crocheters do, honestly, so it just seems to me that if you've got a woman that plays with yarn in your family, eventually you ARE going to get a pair of socks from them no matter what their flavor of fiber craft. 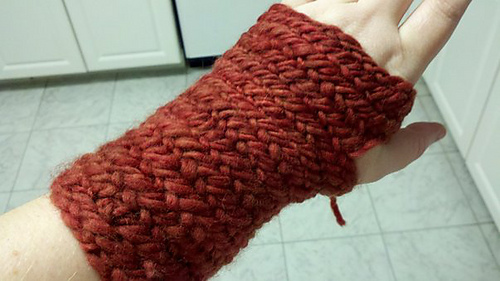 < ---This, btw, is my own creation. Made from some gorgeous Manos del Uruguay in the "V" coloration (which I have dubbed "cinnamon") and incredibly warm. This was basically just a tube worked in the round, nothing fancy.

There is something very soothing about the repetition of the stitching, the looping, the creation of something both lace-like yet incredibly solid... and also the joy of knowing that even if you cut the sucker in half, it won't unravel! Dropped stitches just are NOT a problem with this thing.

While I am not one for tutorials I will provide a few links for anybody that falls on this page and finds interest, since it IS pretty cool and requires a minimum of equipment as well as storage space (I toss all my nalbinding projects in my Hello Kitty lunchbox with room to spare.)

First off... YouTube is absolutely your friend. Just go, type in "nalbinding" or "Oslo stitch" and you are off. There's at least two dozen videos out there that show how to go about working the various stitches, how to do it in the round, and how to make joins or work rows.

If you're in need of some awesome nalbinding needles, everybody I know sings the praises of The Spanish Peacock. They sell handmade needles in a few different styles as well as a few of the books available that cover the subject.
I personally went to Mielke's Fiber Arts for my stuff and got the book by Sigrin Briansdottir as a starter for things. I also grabbed a bone needle, which I later turned out not to like so much as it was splintery on one edge and rubbed my thumb. They sell wooden needles as well, which is what I now use and highly recommend. In addition to that, they also sell some gorgeous handspun wool from Bartlettyarns. I grabbed some in a light grey and it's wonderful, fluffy stuff. Another cool side benefit, the lanolin in the wool put a nice shine on all my wooden needles!

As far as sites for information, I direct you to the following:
~Basic Nalbinding
~Viking Girl's Workshop (videos of the stitches are on this site, so it's of particular use)
~Bernhard's Nadelbinden (available in German and Dutch as well as English.)
~Dilletante Nalbinding (a few helpful tutorials, but also really nice if you just want to look at a whole ton of nalbinded items)

It's not often I go crazy explaining a hobby and start listing sources, so I hope some folks find this useful. It really is a very restful craft, and so far I've really enjoyed the arm warmers and socks I managed to cobble together from it. In addition to learning something that the Vikings used to do (!!), it also has the cool "historical reenactment" factor going for it. If you're in to that, anyway. I know I am. It's easy, it's portable, it'll get people who are really in to Making Things With Yarn curious and asking about what you're doing, and it might make you a few new friends. What's not to like about a hobby that'll do all of that for you?
Posted by Red at 4:17 PM

here is a good tip to more Nålbindning

Lovely blog! I have found images on Etsy! What did you use as a tool?Christiane x