And now for something completely different....

It's been a long time since we just sat down and talked, hasn't it?
The Mix Tape journal is in the mail as of an hour ago, and I am truly sad to see it go although there was literally nothing more I could do with it. I think it has finally primed me to take on the Sketchbook Project 2012 booklet that has been sitting, unloved, on my drawing table out in the cubby.
The theme for this year that I chose was "Along the line" and in my head I have these grand dreams of drawing entire landscapes out of a single squiggly line, a journey of a little girl with a crayon from early morning to late at night when she's finally in bed. It's really involved and in a style I've never worked with before, so we'll have to see how it turns out. I guess the best course of action, as always, is simply to take a deep breath and just leap. worse case scenario is that there's a public record of my developing art skills when they Weren't So Good. And that's just the ego talking, wanting to appear as if I was formed of earth and walked in perfection in every action and skill. Yeeeeah... not realistic.
I'm also looking forward to drawing up the mascot for a friend's platoon. I have the base sketches down and he's said it looks fairly awesome, so really it's just a matter of putting it down on paper. Special Copics paper, in this case (Deleter brand, for those of you who are aficionados) since I feel it would be the perfect opportunity to work with Copic markers and produce an excellent palette for the image. Plus, you know, it's our troops. I would be terribly remiss if I didn't put at least 110% impossible percent in to making sure it looked awesome.
Very little has changed with the job but for the fact I've made peace with being there. Not long term, mind you. Just enough to get myself in to something else that doesn't involve answering telephones and being screamed at by self-important doctors. I really don't want to be in a job where my inability to help someone out might mean someone's suffering in a hospital bed because they can't get charts or meds can't be dispensed. That would kill me inside.
I've come to terms with my thorough love of programming again, as well as rediscovered the excitement of learning something for use later on. I plan to sit down later today and smash out a few things for practice and practical use (a mortgage calculator, for one... and again. I already made one but apparently my last computer crash ate the files. MEH.) And my poor, patient father's website. I can't do exactly what I want, so I'll do a fair approximation and get something up there, then work on it more later on to improve it. I've learned to get a little creative high off of going back and redoing a project to make it prettier/more efficient/more elegant in construction/just overall BETTER and I've heard this will serve me well in life.
I have a new haircut.... scratch that, hair STYLE... and I'm wearing hats. I'm painting my fingernails, even, and wearing sandals on feet that are well cared for. I've lost 24 pounds since the start of the year and the drive to keep going is fierce. It seems like I have to move somehow, and if I can't do it with my job then I will do it in my personal life, damnit.

I will let you in on a secret... I want to put comics up online. Not web comics. Not the standard 3-paneler with a punchline. I want to stick real honest-to-god graphic novels up online, with adult content and themes and some really abstract concepts that aren't the usual testosterone-driven crap of the mainstream comics. ("Ugh, me love woman and want to save world. Me good guy so me get girl and shrunken testicles from obvious steroid use. Me big muscles guy.") Alas, even my beloved heroines, Pezzini and Dawn, are a product of a male mind and have the back-breaking double-Ds to show for it. I want to make a world where there's no super-powers, no ultimate evils, no black and white. I want people to read my stuff and go oh shit... did she really say that? I want it to give people great pause. There isn't always going to be a happy ending, and quite often the characters will be miserable wretches. There are corners of the world like that, and this is what I want to portray... that unhappy shadow world that doesn't get visited by Martha Stewart and Anthony Bourdain, or the Bachelorette. The world where people are just surviving, not living, and life isn't a place where your parents really told you your dreams could be achieved. I've seen it, and beyond the emo faux-hell some put themselves in without imagining what it's like to truly have to live Without, this place deserves a little bit of time in the light.
My name is Helen, and I've wanted to draw comic books for a living ever since I was 7.
Posted by Red at 9:56 AM No comments:

Yours truly is a fan of having a reason to draw... you might have noticed this given my penchant for drawing and then donating it for projects, especially charities. It gives me an excuse and a deadline, so I leap at such things. This is why I've decided to try a second year of The Sketchbook Project, but holy wow is that a post for another time.
Twitter being the wonderful resource that it is, I stumbled across a few people chatting over a traveling art journal project they'd come up with. I went to the blog of one Brown Paper Bunny who was instigating the entire thing and read over the rules/guidelines to see what it was all about. And then, in a moment of OHMYGODIWANNADOTHATTOO!!!!!1!one!!11!eleven .... I submitted my name.
And they said yes, we would love to have you.
And I thought oh crap, what have I gotten myself in to? Some of these volunteers are professional illustrators...... oh god....
Well, I had enough time between then and about 2 weeks ago to forget A.) that I had volunteered and B.) that I thought I was not a good artist. I'd had plenty of time to get mildly cocky regarding that whole thing, so that when the official Mix Tape Journal showed up, I squealed with delight and bounced up and down in my kitchen with all the fury of a 3rd graders on pop rocks and Mountain Dew. My husband kept his distance and said he was excited for me, bless his soul.
I'll be honest, I let the journal sit for a good 2 weeks just pondering what I wanted to draw. I'd put thought in to it initially and had a really good idea for both my double-page spreads I was supposed to work on, but after seeing the previous drawings in it (6 total to date, done by 3 different individuals) I was a bit intimidated. There was a 3-D paper piano on one page, and everybody was following the theme of blue beautifully. I wanted to do something that held on to the idea of blue, but also had a little sway. I also wanted to draw my favorite place I'd ever been, seeing as this was a "traveling" journal.
What resulted were the following 2 images. I took one day each to do the pencils, then to "ink" them in sakura pigma markers, and then a final day to apply colors with pitt artist markers. IT WAS A BLAST. 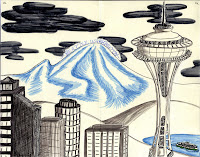 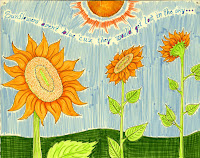 So I found a way to slip in my favorite city/mountain in the world AND my favorite flowers even though they weren't blue.
It was a ton of fun, and I'm sad to see the journal go. It makes me want to work on my own traveling journal, except that perhaps I focus on images from all the places I've been.... it would need to be thick and the paper sturdy, let us say that. I was quite the gypsy in my day. And perhaps best of all, I got to improve my technique when coloring with pitt markers, which I've had but hesitated to use out of inexperience.
It now moves on to the next individual, as all objects that travel must. I really look forward to seeing what everyone else comes up with and how they apply the guidelines. And in the end, I'm really hoping that my efforts have added artistic value to the journal as a whole. That's all I really want to get out of this endeavor.

By the way, Brown Paper Bunny is quite a lovely lady and if you are of the crafting sort she has a most lovely blog. Clicky the name and you shall be there!
Posted by Red at 10:42 PM 2 comments:

And it scared the shit out of me to do it. I used materials i’d never touched before, paper I’d never worked with (Bristol) and used techniques I’d never even heard of. But she was there in my head begging to get out, being as compelling as anything with her eyes and I HAD to do it. I was terrified with each pencil strokes I laid down to create her, then with each ink dab and line…. but when I was done she was there on the paper exactly as I pictured. I was shocked. And then I realized there is no pain in not doing something perfectly,especially in art. They make more paper. You can get more graphite or more ink… so from here on out there is no excuse not to just F* DO IT.
And suddenly I feel freer in that knowledge.

See more progress on: overcome my fears
Posted by Red at 11:00 PM No comments: