The Creative Mind at Work

...or perhaps at mid-stall, depending on how you look at things.
I just wanted to show what my art desk looks like about once every 2 weeks before I go insane and clean it off... NOW with shiny, happy labels to document everything on there!
I'm sorta hoping this proves to people I really am doing work... I mean, if I can be in the middle of THAT many projects....right?
Behold: 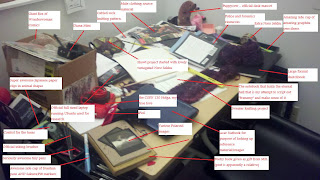 I hope to have this littered with sketches and character studies in the upcoming months. My brain has finally released the poor Muse in charge of the written word in my head and the rest of the story line for the 1st story arc is pouring in to my head with the ferocity of.... a lot of stuff pouring very fast. I am thrilled, because now I can begin to focus on research again on what I know I don't know... and watch police crime dramas. No seriously. THIS IS FOR RESEARCH PEOPLE.
I love my second job. ^_^
Posted by Red at 8:21 PM No comments:

A Fine Frenemy You Are...

Things are moving along, if for no other reason than sheer force of will fueled by adrenaline that seeps out every time I have a panic attack thinking about what I'm about to do.
Mostly I keep thinking WHAT THE FUCK ARE YOU THINKING TRYING THIS?!?! and then I realize... well... I'm trying to do something I love. And that calms my nerves for a bit. But then I remember that I'm the only one running this sideshow, and my heart skips a few beats faster and I start to think about getting behind deadlines I haven't even set for myself yet and and and.....
Last night I bought the website. I'm trying to negotiate with some of my many lovely coding friends to create something for me to use. The last time I tried to do this, husband dear did a lovely job putting together something for the Zombie Nation comic. But I simply cannot put him through that again. We'll see what I can wrangle. I know some pretty awesome people, after all.
It has become more important as of late to work on scripting (first iteration's story arc MUST be done in 8 days... no pressure) as I wanted to have 20 pages drawn, with 5-10 to upload immediately for the purpose of establishing the story. I finally sat down, looked at a calendar, and decided that would be November 1st. So as of November 1st, I want to have 20 pages ready to go. I keep saying 30, but really if I have 20 ready to go I'll be more than thrilled with the whole thing. The struggle will be to keep that 5-week lead going and churning more out to cover for when I do things like go to convention season, something I'm planning on doing (at least one or two, to see what they're like and teach myself the ropes)
It truly has become like a second job, and while I love it, it is most certainly stressful. I have to script, read up about police procedures because THE FIRST THING in my comic involves a crime scene, and go through and practice on everything I'm discovering I have serious problems with. Profiles for one. Keeping faces looking the same no matter what angle the head is tilted at. You know, important things that make or break the art on a story. Nothing big.
I've got my fingers crossed and my hopes up. So far things are going along slowly but surely and I am watching myself commit the wonder of Improved Learning Under Time Constraints that has saved me on several occasions.
I've decided I'll only be releasing pages Tuesday and Friday, giving me a minimum of 3 days to work on each page. If I have the script done, if I have the pencils down and if I have the ink ready to go, then it will all fall in to place. I just have to keep working at all of this and forgive myself for the learning bumps ahead.
On that note, I am starving and there are sour cream and onion chips downstairs. I claim them for Spain. Or, well, for me really.
Posted by Red at 8:38 PM No comments:

(For any of you that have actually seen Superman/Batman Apocalypse, this rides on the heels of my watching that last week...)

Me: It was just inappropriate! Kara-El is in bed in a little nightgown and Superman is sitting there on the bed looking down at her lovingly... then she reaches up and caresses his face cuz he's hurt! And it wasn't a little caress, it was like... sex face! You can't do that! He's your COUSIN! THIS IS NOT ALABAMA!
Bob: Well, maybe on Krypton that kind of thing is okay....
Me; They were on THEMYSCIRA.
Bob: *pauses* ....was it Southern Themyscira?
Posted by Red at 10:24 PM No comments:

A very important thing happened today, one of those moments where I get smacked upside the head by my own brain. Because I absolutely KNEW this was going to happen and I did it anyway.
It is an ongoing battle between my fear of what I can do and what I will come up against that I finally ~cannot~ do, and my desire to create things. I have, in truth, wanted to create comics ever since I was 7. I'm not sure what made me decide, but I'm pretty sure it was spurred on by Linda Carter as Wonder Woman and Saturday Morning cartoons with Firestar and the Spidey Friends.
I'd attempted it once before and loved the wrinkled, balding, toothless bastard child I gave birth to that showed me all of the things I needed to learned - my beloved Zombie Nation, which I might redraw and go back to some day if I were paid to do such things. But for now it was a lovely experiment that taught me I have an innate love for telling -and drawing- a good story that I can share with others. On some level I want that intimacy and freedom to project a part of myself and my creativity out in to the world and have it be received and run with by others. There's nothing like it.
So it was with immense trepidation that I began to work on a new comic... although comic is not exactly appropriate as there's the undercurrent of something amusing. So for now we're saying "graphic novel" and hoping it doesn't come across as trying to be an artiste.
It actually looks as if I might be able to pull this off. I might've learned enough about pacing, angles, visual clues and whatnot to tell a decent story. And when I realized that all it might take is a ton of practice and I could do it this time around, well.... I got a little excited.
And then I did the dumbest thing EVAR and posted my excitement to the internet.
I post a lot and my friends generally pick and choose what of my babblations they are interested in to respond to. I'm in to many varied things, so there's a little for everybody. But then there's the people who are friends with me and only ever make negative comments, or who basically ignore and don't interact until they see an opportunity to point out when someone is Wrong On The Internet.
And this happened. I posted what I was planning, and somebody snarked me. The ONLY response to my excitement, in fact, was this snark.
The entire thing has since been deleted because I don't want it in there. I am an unnaturally sensitive creature despite this fantastic overlay of brusqueness I have cultured. Was it cowardly? Does it make me thin skinned? I don't know. It's already done. That is not the important thing that happened in all of this, so I'm done devoting thought to it.
What I realized was twofold; the first is that people on the internet are assholes. My husband looked at me incredulously when I told him what happened and used those very words, as if he could not believe I was caught off guard or surprised at the thing. And he's right. When you throw an idea out to a large group of mixed people, SOMEONE is going to say something. A few may even dogpile it and slam it to the ground. It is the nature of not having to look someone in the face when you comment, and it is the nature of incomplete communication and understanding. I have lived this so many times it makes my teeth hurt, and I should've known better.
The second is that it is VERY important early on in the birthing process of an idea, a project, anything being created, to keep it close to one's chest. It's very fragile and needs nurturing and light and hope to grow. It will never get that if you leave it out for the general public to trod upon. Ideas are ephemeral beasts even when fully formed and able to stand on their own. A newborn idea may never have a chance.
In the end I realized that this individual, soon to be unfriended on the Facebookz, had done me an amazing public service. They had reminded me that my energy should be inward facing right now, working on this project that I want so badly to create. Talking about it, sharing it, dissipates the creative energy in this intangible way that I've seen over the years. A quick snark and all of this knowledge came back to me in sharp focus, as if the Universe were saying "Look, if you want this to succeed mebbe you keep your mouth shut for now."
I am a believer that all interactions can be learned from, it is only the capacity of the individual in the situation to do the learning that shapes or limits it. It may have started negative, but what this person does not realize is that their boot stomp just made me twice as determined to finish them. I am grateful for the lesson, and I am moving on. There's too much to do now to dwell.
Posted by Red at 7:33 PM No comments: