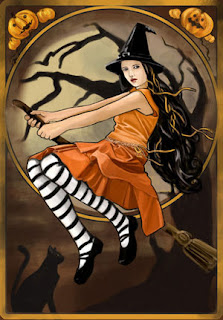 It's that time of year again when a million favorite things and one new one come crashing down around my ears.
Halloween, of course, being the primary of these things, has already slipped past us. We are even on the last day of the feast of All Saint's, if my think knowledge of Catholic lore serves me right. And whatever mystical things normally present themselves for the experiencing during this time of year... well, they just didn't happen.
Normally something truly creepy happens around this time of year. And yes, there is something to be said for the power of suggestion, but when you turn around and there's something hunched over, all of 4 feet tall, and looks as if it is made of the good ol' analog TV static when you were between channels, well, that tends to catch your attention. Also, I am utterly unsure how I could've just created something so frakkin' bizarre AND have such a disconnect with reality that I could feel it brush past me. This is just weird shit that happens in my house. They've checked my brain and my chemicals... I'm fine. So it isn't that I'm stuck in Crazyland.
But for some reason this year this did NOT happen. At all. Like there was a surprising void of ANYTHING going on. To the point that I found myself growing slowly depressed, as it's one of the things I look forward to about this time of year.
This Halloween has been a truly weird one. I was literally hanging the majority of our decorations ON Halloween. Every previous year I've had them out the last week of September and scoured the local stores for sales to see if they had anything I could add to the setup. Not so this year.
This prompted me to wonder if appreciate of the event relied on something as stupid as... money. For instance, I have been unemployed since the week before last Christmas. And I have discovered that all of the holidays this year have seemed "less" somehow... and it's probably because my attention is elsewhere, worried about and consumed with the act of trying to find a job, trying to save money, trying to make ends meet... and I think that it is now coming to a head and eating up whatever energy I might normally have to enjoy my favorite of seasons. And with the thought that money really might be the root of all happiness, my faith in my ability to overcome and not be dragged down in to materialism is heartily shaken. In fact, I'm pissed. And also, we ran out of candy at 7:15 on Halloween night (ooo were we unpopular at that point!) so there isn't even chocolate in this house to drown my sorrows in, which is the height of lame.
To top it all off, the lamp that I set out to help "guide the dead home" as I do each year is gone. Using a different one didn't feel right at all, and the entire thing just feels very incomplete. It will fade with time, but I'm in it now and I'm displeased on some level.
So if it is money that caused this break.... well, I've no Buddhist thoughts to take away with this. I just know that I did not enjoy my favorite holiday, that the magical twist of things, the bite of the air, the angle of the golden setting sun, did not impart to me that spooky and mystical air that, until this year I have always experienced. The only coinciding factor is that until this year I had a job. Funny, almost, that with all this free time I didn't enjoy it more, eh?

But then... oh, because there is no rest for the weary, we now launch in to my favorite month of the year, November!
I have joined in and won the past 3 NaNoWriMos, where -for those of you following along at home- you have the month of November to crank out 50,000 words of cohesive fiction! Hence Nationa Novel Writing Month. I say cohesive because it IS entirely possible to string together 50,000 random words. The point is, when you're done you're supposed to have the fine makings of a proto-novel to fawn over and be in amazement of. It's actually not hard, it's just frustrating after a while. You really lose steam the second week, and as always predicted, week 3 the lost time is regained.
As of right now I'm sitting on 2,581 words of fiction that I sat down and pounded out last night over the course of an hour. If I manage 2,500 words a day, I will be more than ahead of the power curve. The excitement this time is that I had character names and utterly no plot. I am literally making it up as I go along and I've never had the courage to just fly by the seat of my pants like that. I hope it'll be as thrilling and ridiculous as my artistic brain wishes it to be. I have already used the Fox Yip Hat for the purpose of literary inspiration, and the whole thing just feels like home. I secretly wish I could do this for the rest of my life.... me and about 30,000 other Americans, I'm sure.
This year we have an additional little mini-holiday in the midst of all this craziness. This really is the most important of all. Without question.

Sort of self explanatory. Get out there, America. We're going through tough times and emotions are running high. I'd like to ask you to vote logically, but I know that people vote with their wallets and their fears more often than not. So I'll be happy if you just get out there and VOTE. If there is no other reason, then people will see what we really want instead of telling us and they'll be forced to pay attention briefly as everyone readjusts to the changes. But at least it'll stick in the craw of many and be remembered in the future, and what more can be asked for than that? God bless Democracy and the Republic.
There are other things coming... the birthday of my beloved husband, the birthday of my younger brother, Thanksgiving... November has never been a slacker-month in my life. I'm looking forward to time with family. I'm looking forward to crazy writing sessions at 1 am when I get on a story line kick and I'm so caffeinated my eyelids are on fire. I'm looking forward to pumpkin pie and playing with my nieces, and even to the scurry of Christmas shopping. I'm looking forward to kissing my husband and relaxing with him at home. And hell, maybe somewhere in there someone calls me and gets me employed again. One can always hope.
Posted by Red at 11:28 PM No comments: