I heavily debated NOT continuing with my ARG since so few people seemed to be joining in on it. Then I realized, if I did it just for me, made the scary just for me... I would enjoy the HELL out of it, and maybe somebody would stumble across it at some point and enjoy it.
And then I logged on to the blog and saw that someone from another ARG was trying to play along and talk. And that bolstered me a LOT.
Frankly I'm enjoying the story I'm building and being creative on the fly. Really need to do some more audio-visual stuff for people but that will come. Photos, I think.

Somewhere I think I missed my calling as a story-teller. I've always loved to write and draw. I need to put the two together and just keep going with this stuff.

Also, I love adjusting photographs and messing with things for this. So if for no other reason than that, and learning proper video editing and effects, I'm going to keep going.

I HAVE BEEN BUSY, OKAY??

So my friends/coworkers were taunting me that I hadn't been updating lately. Two things.

That last one is on the lips of everyone on the internet, ya rly I know. But it's the truth.
September, October and November are my Busy Months of the year. Always have been. I don't know why.
Let me sum up what's been going on. Spent 56 hours at our company's system office making sure I could be on staff if a major emergency happened. By the end of it I was so loopy I was "shouting" all of my texts at people and laughing hysterically. Had to take one of the narcolespy pills my doctor gave me, but I got home safely.
I was in so much psychological and psychic (they are diff, look it up) pain that I couldn't appreciate the crash in to my own bed on the first night.
Two showers, a plate of dippy eggs and a night of snuggling with the spouse later and my brain had returned to half power. I had just enough to dress up, throw the decorations back up outside, and hand out candy. I love Halloween and nothing short of that dang hurricane was going to keep me from it!!
I really felt like our first Halloween in the house was a success... and now I know that next year I need to light up the graveyard out front and add more tombstones to the front. I also want to line the walkway with hack-o-lanters to help people find their way and get more bug-eyed things that blink for the bushes.
Seriously, I have two totes of decorations for Halloween. I only have one for Xmas. Does that tell you how much I love this holiday??
There were 2 containers of glow bracelets purchased for a total of 140, but only 120 were made. Of those, 119 were given out. Because I'm that good.
After all of the children came for their loot (and some were nice enough to go crazy over my costume, recognizing me as Fionna from Adventure Time) We went downstairs in to the appropriately dimmed basement and began to play Assassin's Creed III on the new setup. The surround sound is AMAZING, and the water affects are gooooorgeous. I can't wait to play Arkham Asylum again on this thing.
A few others things done in the past little bit - knit a cabled design of my own design while stuck at work. Looks like this: 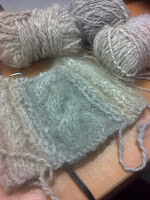 And it is already 3 times the length of that, about half the way around my throat. I came to the startling but not altogether unpleasant conclusion that I'm going to have leftover angora when this project is done. Oh DAMN.
I'm currently trying to find the perfect wooden or vintage buttons to close the thing with, and I'm trying to figure out how to add ruffles along the edges, a slightly longer one for the side nearest the collarbones, a smaller one near my chin.
Did I mention it's soft? OMG it's soft.
Another project I blasted through like a boss - my alpaca boyfriend sweater! YAY! Behold! 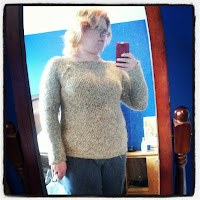 I am seriously proud of this thing, as it's the first full sweater I've ever made for myself, it is AMAZINGLY warm, and even with toying with the pattern it came out pretty damn well.
I was hoping to wear it to Rhinebeck this year, but alas the sheer amount of yarn defeated me. That being said, seriously, I still have about 800 yards left of this stuff and no idea what to do with it. I started to make Bob an awesome cabled scarf out of it in the hopes it would keep him warm, but it might take a while. The stitches are smaller and more fiddly on that thing.
I also managed to sew and wear a skirt for Rhinebeck! (matching skirt with my buddy Heather, aka @digitalnabi) Go me! Somehow I don't have a photo easily accessible for that, but it is an utterly adorable grey plaid skirt with lots of crazy colored stripes. I love it.
I fully intend to sew myself a pair of corduroy pants and an apron next.
Also on tap, finishing up my Tunisian crochet skirt, my Tantra crossover top, and sewing up the edges of the curtains we just bought because they trail on the floor. Too much potential to get dirty!
I'm more than thrilled to be home right now. I feel the recurrent need to just Clean Shit Up around here, which is much better than the urge I had to Just Sit On My Ass and led to the needing to clean all the things in the first place. My house is coming together fairly awesomely, I'm getting problems solved, and all those things i used to put on hold indefinitely are getting handled.
Next thing to tackel - Thanksgiving.
I should really do a post about Rhinebeck, since it was such an amazing time. I'll just be pretending I'm a part of NaBloPoMo or something. Honestly it was the most fun I've had with friends in ages and it deserves its own written hoorah.
Speaking of NaAllTheThingsMo...

WHO'S WITH ME FOR NANOWRIMO?
I swore to win it 5 times, and I shall do this thing. I've got a feeling! This is the year! I'MA DO THIS THING!!
Now to just figure out how to write while trying to do everything else.
For instance, I slept through all of my free time this morning. On the first day. So that bodes well.