Beyond "hobby" and straight down the rabbit hole in to obsession...

I have many hobbies. If I allowed people to see the yoga/craft room, it would be obvious in an instant, because the place looks like this:

This after I cleaned up a bit because there was a small avalanche when I went to dig some yarn out for an Emergency Stash Transfer earlier this week.
Also... I don't know, I'm on the fence. Do you think I need more white plastic craft shelving in that corner?
Other people have "guest rooms", but since we don't often receive guests and I would never put beloved friends and family members in the direct path of an Art Supply Avalanche, this room is where I go to meditate, stare at my mess, then get up 30 seconds later and try to organize. Sometimes there is yoga. Most often there's a dog and a cat on the floor leaving their wads of hair everywhere.
But what's interesting is that the smallest shelf there, the one you almost wouldn't even notice, is the one I've probably dumped more time and money in to. It's the one under the bright green square box that currently holds my backlog of 26 rolls of 35mm film discovered while cleaning up boxes a few months ago. But that's another story for another time. And no, not the bright green box on the left that's tall, that has my backlog of 120 and 110 film. The one on the right, down low. There ya go.
It's flat, white plastic, and inside it is the majority of my camera gear. The digital camera and a few other things aren't in there.. the Nikons, for instance, have their own bag.
I really dig photography. Perhaps I'm not too terribly awesome at it, but it's fun to see something, think "I want to show other people this moment in time", snap, and walk away with something really neat that might be appreciated later by someone else. Is it an art? Sure, in the hands of other people. I like to think of what I do as "ADHD moments". Something brilliant, momentary, flashes in the pan and there's not long to catch it. Say, a group of the elderly catching shade where they can at the beach, staring wistfully out to sea while listening to a guitar player ply his craft in the deep shadows... 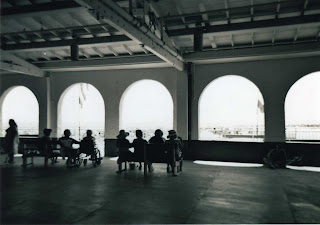 There are other moments, too, but this would turn in to a huge photo post and let's not do that right now. You get the drift. My attention shifts constantly, and it's a struggle to find something that will encapsulate what I'm looking at, why I love something so much. Really, in everything I do it's an attempt to reach out and say "Here, I feel this, I see this, what do you feel? Is it the same or different?" because I'm fascinated by human connections and what triggers pleasant things for one but unpleasant for another. People can come together over a photo that evokes emotion, even if it's not the same emotion. This is what I want to insert more of in to the world. That, and while we are being completely honest, hoping to find more kindred souls out there who dance to a drum, even if it isn't the same beat as mine own.
It's not art that I want to make, although it is deeply satisfying to manage something that others might consider it(even with the subjectivity of the entire designation to begin with.) It is, instead, a trail of breadcrumbs, moments that show in a bright flurry of action, or pattern, or color, or even LACK of color, the experiences in life that seemed really neat, and that others might have fun in sharing.
I lied, I am going to put one more photo out. This one. 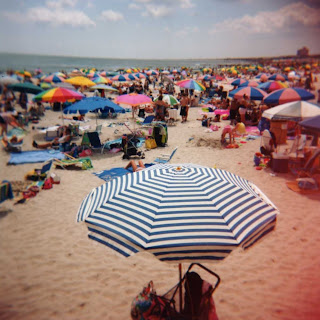 This is "Umbrella Fields", the photo I took that ended up landing me a place in the Krappy Kamera Exhibition for this year. That isn't why I'm putting it up here though.
When I took this photo it was a VERY hot day on the Jersey Shore. Ocean City, to be exact. I looked out over the beach from one of the piers and marveled at all the color. The Holga was raised, the shutter was clicked, and I hoped that I had truly captured the shock of all that color on to film (Holga is old school, or "analog" as it has come to be called/derided in the photography community. It uses acetate and chemicals for make de images) The problem is that I wouldn't know until I got it back from processing, and that means a loooong trip across country to Oregon to the only place I will trust with my film.
Allow me to pimp them here, for Blue Moon Camera absolute friggin' rocks, and is able to process just about any film format you can image. Also, if you write something on the order form like "Please for the love of god process everything as C-41 and ignore the label that might say otherwise," they make sure to note that they did, for the love of god, do that in their notes. Awesome.
When I got the photo back, it WAS bright. IT WAS colorful. But my thought was wow, this seems so very flat. I remember it stretching so much further. I remember the swath of umbrellas being broader. To me it seemed that the moment I wanted to capture wasn't quite the one in my head. Without a second thought, I scanned it, dumped it in to my deviantArt account, and moved on with life. I was somewhat disappointed, thinking that it was not the perfect image I'd hoped it to be.
But then something very strange happened. DeviantArt communities got a hold of it and started to pass it along through features. I was sent several request to add it in to galleries of groups I didn't belong to (I think I have since joined 2-3 of them to see what lovely work others produce). It is one of my most viewed pieces of artwork on the entire sight, and when it went up on Flickr the same thing happened. It was then that I started to realize that just because it didn't perfectly match ~my~ memory of what it looked like, it didn't mean there was no power to evoke powerful memories of the beach and summertime for others. At least, this is what I assume is going on, as all decisions to like or dislike art really come from a gut reaction.
When I was putting together my portfolio for the Krappy Kamera Competition it was actually my second to last choice to go in. I didn't think it would be good enough, honestly, but perhaps the bright colors might be nice...? Of course, at this point I'm glad to have made that choice, as it was the only one that is going on exhibit tomorrow. And I do think it was the colors on one hand, but also the strong pull of memory and emotion on the other that probably helped it along.
It's my hope to keep going taking more photos, doing work that speaks to people and showing them the fleeting flash of moments in life. My work is not like Ansel Adams because I am not Ansel Adams. I don't see like he did, and I certainly don't have that kind of patience or the ability to reckon that technical knowledge. But if I can get a thousand people to react with a smile at seeing a photo of fifty billion umbrellas in the hot summer sun, then I think I did my job.
By the way, if you find yourself near TriBeCa in NYC and the SoHo Photo gallery during the month of March, stop in and visit the 50 gloriously beautiful images produced by people with a plastic lens and a grand eye for detail. It's an honor to be among them, and you'll get to see some of the best photos from the lomography/low fi photography community you'll find anywhere.
With photography I impact the maximum number of people the quickest, and it's probably why this has become my "crack" of choice over all the other things I do. Creation is nothing without the breath of an audience to carry it elsewhere, make it grow. It also lets me observe the human condition more closely than any other means... a reverse voyeurism, I suppose, given that people would be looking at my images but I would be watching them. Hey, I'll admit it. :)
In the near future we'll have to revisit the crappy camera collection, as it has grown and why have a collection if you can't show it off??
Thanks for listening to the ramble.
Posted by Red at 9:02 AM