Moar Food for Thought... well, no, for Lunch, Really

I am slowly coming to terms with the fact that I am a foodie. I've got a support group, I talk to a counselor. I only watch 5 hours of cooking shows during the week anymore and I try to be really selective and make sure it's not one where somebody's going to whip out a black truffle and start shaving away, causing me to go "OMG I MUST MAKE THAT!"
Hi, my name is Helen, and I am and addict....
...but I digress...
There are days when The Muse (aka The Bitch, aka She Who Disrupts my Afternoon by Making Me Obsess about Crochet Thread Width and Related Projects on Her Whim - true story) likes to have me play with pencils. There are other days when it's watercolors or ink. Still other days it's yarn and fabric, or film.
Today though, is a rare day. One of these usually only spins around about once every two weeks or so, sometimes only once a month. Today she decided I would be making food and it would be creatively done and tasty.
This meant when my husband got up, so did I. I constructed for him a lovely themed bento with lots of healthy things in it. I even pulled out and used my miniature cheese cutters to make a face for the meatball, and clouds for other things. It was awkward, but cute. I am now also assured via IM that it was completely delicious, even with awkward face placement!
But then... well, see, that wasn't enough. Generally speaking we have to do TWO projects, usually back to back, before the overwhelming need to create like some crazed maniac subsides. Today was no different, of course. But I needed to focus to work on a few things and tried to shove it aside.
A Convergence of Fortunate Events was also happening at this time, which I must now share so you understand just how neatly this all fit together.
The first is that I am currently experiencing the lovely feminine mysteries, and as such I am madly craving red meat and egg yolks. The craving of red meat has been historically documented, the egg yolks is a new thing. Healthier than downing chocolate, so I'm going with it for now. It's just unnerving that body seems to really want to absorb the very life force from formerly living things, like I'm some strange vaporous being sucking the breath from babies and wilting flowers as I pass. This hasn't started to happen yet... if it does, I'm locking myself in my room and never going out again, cuz that shit be freaky.
This led to me having a conversation with a friend in my World of Warcraft guild last night (an awesome group of folks, albeit given to repetitious jokes during raids) where we discussed our love of a good, warm, runny egg. I was already craving them, but that made it a lot worse. In fact, just thinking about it again my body is telling me it wants more. My cholesterol is going to be horrendous...
...but again, I digress...
As we talked, she told me about a breakfast her mom used to serve to her where she would put a runny egg on top of rice with soy sauce.
That image captured my mind even as I was busy eating a medium rare hamburger with a fried egg on top (blessings on you, Red Robin, for your small mercies toward my system) and I decided I would be having that in the very near future.
Fast forward to today, and insert giant grin here: 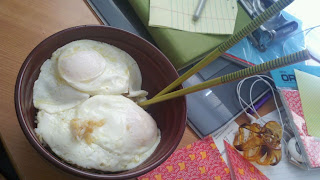 (I have already been chided for the chopsticks in the bowl... my apologies to my Asian friends, yes, I know better. IT just looked so nice when I was framing up the shot... I didn't mean to splash bad omens everywhere.)
This followed on a conversation about fried eggs, dippy eggs (the kind where you can break the yolk and dip your toast in, my normally preferred way to eat them outside of bizarre synchronistic food cravings) and scrambled eggs. My beloved admitted that he used to have his eggs fried and asked me to make him scrambled because it was easier. In a twist of irony of almost Magi-like proportions, I kept making scrambled eggs because I thought it was his prefered way of having them. It turns out he's used to fried.
Knowing this, I tried to remember how I'd seen them cooked, as it's probably been years since I attempted an egg that wasn't scrambled somehow. I do remember failing very badly at it, and thus resolved to figure out how to Do It Right.
A little too much margarine, a nice hot pan and a little rice cooker action later and we produced the awesome concoction to the right. Perfectly made, non-burnt eggs with the center still runny, over warm rice. I cheated and threw a touch of mirin in to the rice to cut the salt from the soy sauce, but otherwise it was no different than how it was described.
It was sublime. I had no idea that egg yolk would work so well with rice and soy to form a trifecta of awesome in my mouth. The soy was only really overpowering toward the bottom of the bowl where it had pooled and I started to run out of egg yolk. A lesson for next time, of course. Less soy!
So, yeah, that bowl of rice and egg disappeared in about 5 minutes. Because it was something I had to come up with ideas on as we went, the Muse seems happy for now. My egg craving is sated. AND, on top of that, I have a fast and delicious lunch to try, or something to make for dinner one night. Simplest is best, and I have been trying for simple lately. This is pretty much the epitome of simple.
And really... it is so nice to have that bitch of a Muse off my back so I can get back to focusing! I just wish all resolutions were so triply pleasing!
Posted by Red at 1:08 PM