We bake a lot in this household, although we try really hard not too. That being mostly due to the fact that yours truly knows nothing of everyday bread baking such as rolls and, well, bread, and everything about cakes, cupcakes, brownies, tarts.... the sweet stuff.
So usually when the urge to bake arises it is shoved roughly to the side because it will eventually result in me putting on weight. This is an established pattern. It is known.
Well, I realized the ultimate way around this was to figure out something utterly irresistable and delcious to make and then give it away to other people. Brilliant! The urge gets satisfied, and people start to think that you're a pretty cool person because you just randomly bring cookies to work.
Well, I got it in my head that since my birthday was coming up, that everybody who I remotely know and comes in contact with me should have to suffer the merriment of the day with me. This means something fairly damned epic needed to occur, but only because (true story) I figured I'd be dead by this year. Don't ask. I lived a rather crazy life.
ANYWAY
I promptly declared publicly that I was going to bake up "Rainbow Unicorn Cupcakes" complete with glitter and all that jazz. This, before I even knew if such a thing was possible or that I was even remotely equipped to pull it off.
So into this landscape comes THIS PICTURE (which I stumbled across on deviantArt):

I mean the name of it is ~literally~ Unicorn Cupcakes, after all...
Upon seeing it I realized that these lovely things were what I was making for my Birthday of Enforced Merriment. Couple that with other images I found after doing a search (you would be floored at how many people have done this technique) and I finally stumbled across a tutorial talking about how they went about making these things.
When I realized it was nothing more than sectioning out the batter and putting fish-growth stunting amounts of food coloring in there, I realized I absolutely had to give these things a go.
I didn't bother with the gel dye because I had little bottles of cheapie liquid dye hanging around already, and I wanted to give them a shot. One box of white cake mix and half an hour of arduous dye mixing and resampling later, and I ended up with batter that was a deep enough hue that I was okay with it. Sloppy spooning and uneven portion sizing later and I had some strange looking mounds of wet batter in really flimsy paper cups that didn't really hold them too well.
They smelled utterly DIVINE while baking, and I had to set a timer and go sit on my hands to not pull them out too early and start icing them just to get them done! My whole house smelled of awesome cakey goodness, and knowing that there were technicolor treats on the other side of that smell made it that much more awesome.
Finally cooled, I took some cream cheese frosting (already in a jar, just regular vanilla whipped in a jar) and added just barely enough food coloring to give it a lovely lavender color. That, some purple sprinkles, some irridescent edible glitter and silver star edible glitter later, and this was produced: 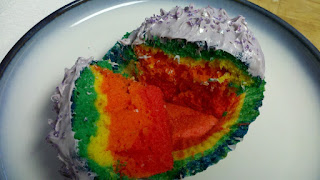 If you look close enough, you can see the silver stars on top. Unfortunately you don't really get a clear shot of the blue layer because the frosting is covering it and I had portioning issues toward the end. It tasted no less awesome, though!
Usually I don't bother to do a "test run" on things I decide to cook, but something told me this time if I didn't, I would be seriously sorry. And I'll be darned, but my intuition was right! There was a lot of chaos going in to this.
For next time -
1. Each color gets its own spoon. Screw not wanting to create more to wash, just using one fork and one spoon led to a total logistics nightmare.
2. Each color gets a much bigger bowl and a more precise portion measurement than "Um, that's 3 heaping spoonfuls slopped in there now". This will regulate color so we're not left with another entire cupcake's worth of red batter, but no other colors. :/
3. Better cups for these things! I got the Wilson paper cups and they are cheapo pieces of CRAP. They folded and buckled and put giant gouges in to my cupcakes because they wouldn't sit nice and flat in the cup (and yes, they were the correct size) so I'm going to go find something else... maybe some silver foil cups to compliment the silver stars. Something stronger, in the very least.
4. Seeing how long the stars last and how a few go a long way, I'm going to ease up on being a grinch with them and put a few more on each cupcake. They come in a very teeny tiny vial, and unless I knock them on the ground in a moment of pure flailingness, they'll last a long time.
These were a LOT of fun, and now I know that I'm probably better off making my own frosting (Able to control the flavor better that way. They claim it was cream cheese but I tasted nothing of the sort) and dying it, so there won't be half a can of light purple icing hanging out in my fridge looking at me with sad puppy eyes cuz I've got nothing else for it to do. Also of note was their odd little trick where all of the colors cooked up through the center, so if you took a bite there was almost a "tie-dye" affect to them. Behold, you can kind of see it in this picture.

That put me in mind of some other things that could be done later with more colorwork in foods, possibly by something as simple as dragging a chop stick through consecutive layers of color, doing small swirls, general agitation... good fun stuff.
As an aside, when I posted this to Twitter, someone asked me if they were earth day cupcakes. I now realize they do kind of look like little maps of global warming in an entirely delicious and unintentional way!
From the reactions I'm getting, it looks like these'll be quite popular. I'm going to bring them along for the Maryland Sheep and Wool Festival to pass out to folks, since many will be there. I'll also keep a few on hand in case people stop by, but definitely NOT for nomming myself. Oh no... this is one of those moments where I know I've got something really fun and that a lot of people will really enjoy getting to try on their own. I can't wait to pass these out.
Now if only I could make them as awesome as this last picture I found... multi-colored icing would only make it MORE awesome, but I think it's beyond me. For now. 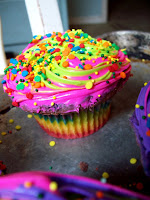