It has been a great amount of time since I last posted, and that probably because I felt like I didn't have much to say. Most likely it would've been along the lines "Look, internet, I am still in the midst of keeping my offspring alive."
Nothing fancy, basically. Unless you wanted to see all the pictures of half-accomplished projects I had going on, too.
I was feeling aimless, floating, really. It was getting frustrating because I would think "Wow, I would like if X would happen" but then noted that it kept not occurring.
Add to that the incessant and repetitive (but not identically scheduled, because oh nooo no two days are alike or allow for a definite schedule) care of my now one year old, and I felt like nothing was happening in my life. I was destined to shovel food in to something that sometimes hugged me and sometimes smacked me in the face with hard plastic toys, and that was the end of my days as anything else.
Then I noted that when I had something that required a few weeks of planning, like decorating and getting ready for Halloween, my brain LEAPT at it. I focused on it. I got small details done. I did things in the midst of doing other things that made sure it got finished. In short... I got my goals completed. I was shocked, in fact, to finish everything the morning of Halloween. Usually I'm lamenting missed chances to go do things, decorations that didn't get to be outside. Nope. This year? Everything was done.
I was taking everything down this morning and wondering to myself... what was the difference? Why was this so successful when everything else in my life felt like it was unanchored? It is true that I adore Halloween like no other holiday, and when my dear Evie is older we will bake themed foods every week, and make costumes together, and put up spider webs both inside and out. WE CAN DO HAUNTED HOUSES AGAIN. I look forward to that immensely. But I still dove forward despite the fact that the full celebration wasn't able to take place.
And that's when I realized that I had shut my life down, at least mentally, when I'd had the baby.
That had been my goal and culmination of everything. I was to work, then to get pregnant, then to leave work and have the baby. And raise the baby. And those were all met, which meant my brain didn't just feel like it had stalled out... it had literally stalled out. There was nothing for it to work on in the background, no data to parse. No plans to make. No small reminds to look out for when I was out and about, that oh yeah, this thing reminds me I wanted to learn more about how to do X.... it's hard to describe. The subconscious was twiddling its thumbs, bored as hell, and no wonder I felt stupider.
It's true, since I've had the kid, it feels like I'm trying to think through a muck or a thick fog some days. Part of it has been identified as hormone-induced migraines with atypical symptoms, but the rest of the time I struggle to remember where I set down my coffee cup. Considering I fixed computers in emergency rooms under serious time and materials constraints prior to all of this, atrophy could quite possibly be occuring.
But I digress.
At the same time, a package arrived from Okinawa courtesy of my friend Deya who trades care packages with me about once a month. I had requested her finding me a Daruma, as the last time I had one I'd used it to "wish" for a house, and it was now sitting on the mantlepiece with both eyes happily filled out. It showed up, almost a mirror of the one I picked up in our own trip, and I began to put a great deal of thought in to what I wanted this time around, since I knew it had the ability to do some fairly large psychological tweaking in my favor. 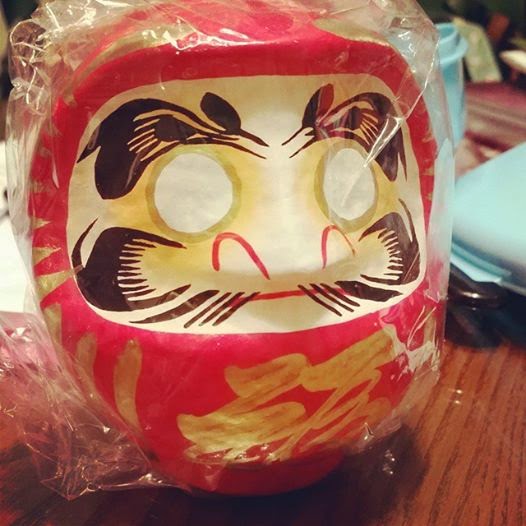 Added to this, this morning's moment of "oh!": I have at least twice now sat down and written out a 5 Year Plan detailing what I wanted to accomplish with my life. It dawned on my as I brought in the last of the spooky lights that I had not gone back and rewritten them since meeting almost all of my major goals. Grabbing my Moleskine (special Pacman edition, y'all) I cracked it open and looking through to be sure; yes, indeed, all of the most major things that I had wanted were now complete. The other things were all goals I had written before having a child and understanding materials and time constraints. Ergo, my brain had just discarded the whole damn thing and none of it was percolating in my subconscious.
That lightbulb.... it was huge when it went on. I sat down and turned to a fresh page, re-dated it, and began to write down my NOW goals. And as I did, my brain felt as though it was awakening and pulling itself up out of the Freudian marsh I'd let it slip in to.
I separated my goals out as I usually did, in to 3 month goals, 6 month goals, 1 year, 3 years and 5 years. I give myself a front and back of a page for all of them, but usually by the 5 year goals I've only got one or two huge things listed. In this case, I already know I'm going to put "2nd trip to Japan" under there, with the stipulation that it will have OCCURRED by then, since the people I would want to visit while there will be gone if I wait that long.
This whole thing works for the same reason that people think praying or casting spells work... you are telling your brain you want something to occur. Your brain grabs hold of your behavior and your thoughts and begins to subtly direct you to complete those things.
Now instead of thinking "It would be great for X to occur", I will always be WORKING for X to occur, and by a specific time frame. Which is great. I love it. I need it. My brain needs it. And it'll get me out of this giant rut that made me feel useless and lonely ever since everybody left from visiting my newborn.
Saying I am excited isn't quite right, but I am energized. Focus will do that to somebody who's used to knitting while watching TV and surfing the internet to keep herself entertained.
Anyway... just wanted to share. 5 Year Plan. I got one. And I already started working on it shortly after I refilled my Lamy fountain pen to write in my pretentious as hell Moleskine.
As for the Daruma, I wanted to wish for something that reached deep, that would cover several areas of my life instead of just one small happening. I wished for "Growth". That should cover everything I want to accomplish over the next few years and keep me active in learning and continuing to expand life for myself, for spouse, for Evie, and for any other littles who might come along.
I wish this were more eloquent. I wish it were funnier. But you know how you can't really process something when you wake up from sleeping a long time? Like sleeping longer than you should have so your brain just won't get itself together and you're stumbling and you can't remember where the coffee grounds are to make that coffee you desperately need? That's what it's like to be me right now. Dormant. Awakening. Not really coherent quite yet.
Perhaps there'll be more posts as things get worked out. Perhaps things will get sorted. For the first time in quite a while I power-cleaned and organized everything, took a mental catalog of what else needed done in the house, and took power tools to cabinets for the purpose of child-protection. The affects of goal-setting are already becoming apparent. I'm grateful. It sucks feeling like 2/3rds of who you are is turned off.
Posted by Red at 11:45 PM