Stuff I Did Roundup.

So it's about that time where I remind myself everything I've done in the last week or so by posting it for y'all to see.

There was some serious knitting action. 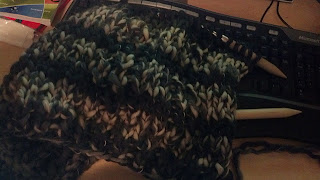 Started and finished knitting an alpaca kitty baby cap to match the alpaca sweater I made her. (Kitty ears form when you put it on her head and the corners stick up straight. Very adorable.) 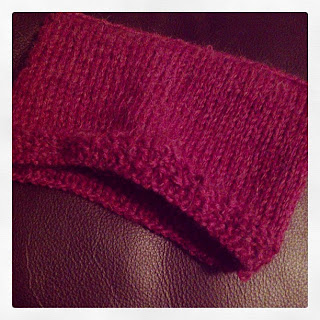 Started another sweater for myself, yet another Shalom. 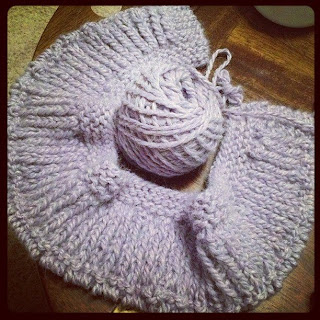 Helped with the construction and organization of multiple shelves and bookcases for the basement and the front room so there were spaces to put things that had been just haphazardly piled up or were still living in boxes... no photos for this, as it was an all-day endeavor and we were SERIOUSLY exhausted by the end of it. Either way, the basement feels far more permanent and the front room feels less empty courtesy of all new furniture. Also, a new chair for the art room that has far more support for my back and doesn't leave me sitting so high in comparison to the art desk. WIN.
Oh wait, I kind of have a picture of that last one somewhere...
The husband and I took a class on childbirth, so we now have a much clearer picture on what to expect and just how much it could potentially suck but probably won't. No pictures for that because we were supposed to keep our cell phones turned off and pay attention to the teacher.
That class basically confirmed every instinct I had about fighting against C-sections, episiotomies and epidurals. For that, I am grateful.

Pulled out the Buddha Board to paint for a bit with no real aim, the goal being to clear my mind and allow my creativity to just go nuts. It was a LOT of fun, and I've discovered I may be perfecting my technique, to boot.
During the massive furniture assembly of 2013 I also managed to clean and reorganize the art room after having the guys who washed hte house traipse in and just dump everything in the middle of the floor in order to try and get to the water main. I thought it was slightly rude of them to not even attempt to put things back, especially after they also just dumped clumps of crap in to our yard and broke a light with their pressure hose, but I might be kitchen-sinking the incident. ANYWAY... I eliminated multiple boxes from the room, reorganized the bookshelves, and got 98% of the stuff off the floor that had been cluttering it previously. Everything leftover is either there for the cats to play with, or is a package waiting to be shipped off somewhere. It feels generally a lot more awesome and inviting in that room now, too.

In a not-so-fun side note I was also diagnosed with EMF sensitivity, which thankfully doesn't seem to kick in unless I'm in a huge retail store or I've dosed myself with more than 5 hours straight in front of a computer.

There were other things in terms of organizing and cleaning that got done that I've either forgotten or didn't take note of to begin with.

Plans for this week are to organize and start sewing items for the baby, get the warp started on my next weaving project, finish my current Shalom sweater and move on to the next one, and get through the last of Sherlock on BBC, which I finally started watching but don't feel really qualifies as an "accomplishment", per se. I'm also going to do my best to wake up at an acceptable hour for the rest of the week since I've had unbalanced sleep hours and resulting insomnia at night. Starting another small baby sweater, as well, and we'll be going to see MST3K tearing "Starship Troopers" apart live on Thursday.
I've also had horrendous heartburn, for anybody still tracking that.
Somewhere in here we're also having a baby shower, too.
But more on that when it happens. I have knitting and weaving and artz-ing to get to.
Posted by Red at 7:22 PM