It is rough when I want to post a lot of happy and find myself equal parts not happy and also forgetful.
The problem lies in the fact that my hormones are doing things to me that are highly illogical and also not deflect-able, reprogrammable or ignorable. So basically I spend a portion of my day crying over something I would've glided past previously, and gotten on with things.
I want to NOT focus on any of that.
So instead I'm going to do a roundup of all the things I am making/doing currently.

~We painted the nursery, it is now a color the manufacturer calls "Pistachio Green". It looks like celery to me, but I wasn't paid to name it so whatevs. The room went from being a grayish light-suck to a really warm area. I go in there now and just sit and think about what it'll look like with the crib and everything in it. And owls everywhere. There will be owls.
Meanwhile, behold it's greeny-ness (and pardon the obvious mid-work mess):

~I completed the knitting on my first ever baby sweater. It's made of gorgeous burgundy alpaca, and now I'm currently messing with my lucet/pitchfork of awesome to work up the ties for the sides.
Allow me to insert a picture of my handiwork because bragging:

It's "kimono style", which hopefully means it'll fit her a little longer than some of the sweater patterns I've seen.
I have leftovers, so I'm going to be making a matching kitty hat and leggings so she'll be super warm this winter. For some reason the thought I've done something directly like that instead of just buying her stuff makes me feel all squishy inside. Damn hormones.

~created a baby wishlist over at Target, which looks about as scattered as my brain right now. I know I've forgotten stuff, and I'm just accepting it. The really important things, the things that people will call child services about if we don't have, are on there. So we're cool.

~FINALLY finished the first half of a project I started many moons ago called the Tantric Puzzle Top. It's 2 strips of 42" long fabric sewn together strategically to form a wrap. I couldn't wear it right now if I wanted to, so the fact I"m only an inch and change in to the second strip is just fine. If I get it done in time to wrap around my post-partum immenseness that'll just make my day.
My claim to fame with this is that I'm knitting the entire thing out of single-ply recycled sari silk yarn. It was not a good idea, as it's a notoriously temperamental setup to work with. But Oh Em Gee am I loving the colors coming out of it. Not only that, it'll be seriously warm in the winter at 100% silk and I can wear it over a long sleeved shirt with a skirt and look fairly rockin'. It can wait. I just like making progress on old projects that got stuck in a rut. Sorry, no photo because mine's not constructed and it's an interior page to Ravelry. If you're curious, clicking this link right here will give you an eyeful.

~I have acquired yarn to make baby blankets for the small one. The first I will be making is based on the Strawberry Tunisian Stitch tutorial over on the glorious Moogly Blog. I already ran a test-patch and it looks awesome: 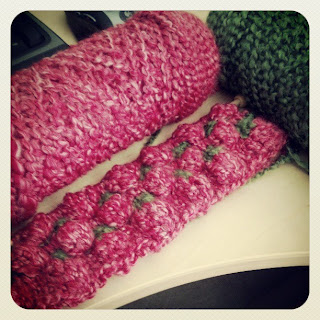 This is just made from some Lion Brand acrylic Homespun that was gifted to me after my grandmother passed out of her stash (an interesting but unrelated side detail). It's hard to do on a straight Tunisian Needle, but I suspect when I move to a shorter needle-and-cable setup that it'll be easier on the hands. I have some gorgeous Cascade superwash wool planned for this in basically the same red, but a more lime green for the tops. It'll be too adorable for words.
In the meantime, I'll be coming back to this and finishing it with the plan to make it the cover for a throw-pillow to be donated to an auction they hold seasonally at my Mom and Step-Priest's church. I just couldn't let all of that hard work go to waste.
The second blanket is another inspired by a post to the Moogly Blog, this one the Blackberry Salad Striped Baby Blanket. I have some awesome summer cotton ready to go for this thing. No picture because I haven't even attempted a test-crochet yet for the "bobbles". But it's going to be in nice, cool colors. And it'll give Eve something to grip and play with and flop on.

~I dyed my hair lavender. Because it had never been lavender before: 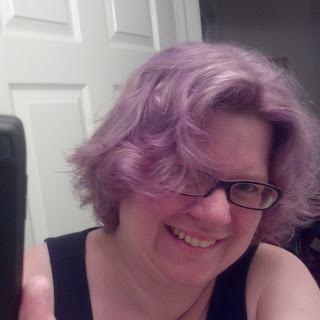 It has started to fade to strips of platinum blonde and lavender, but I still like it. It's unique. When this is done with its semi-permanence I'm going to dye it rose pink to get it back on the warm side of the color spectrum (plus I love having pink hair), let THAT fade, then put it back to its semi-normal reddish blondish brownishness.

~I joined the informal street team for Have Goals out of Milwaukee: 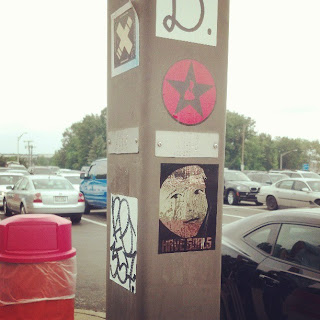 (This was thrown up at Molly Pitcher on the NJ Turnpike.)

~I decided that as much as I hate branding, I hate stereotyping more. And even more than all of that, I love creating things that use traditional techniques for unexpected results. And because of THAT, I decided that I was going to make a superheroine quilt for my daughter... but since she'll have to be bigger to enjoy it, I'll, um, break it in and stuff. Yeah. Because we also have a "no pink for as long as possible" rule, but all of the current superheroine fabrics are in pinks and purples and lavenders... strangely, with bright gold and yellow added in. (Also... only DC superheroines, no Marvel. What gives, Marvel??) I don't get the thought process on that. But whatever.
Anyway, I've been bashing through videos on YouTube like a fiend, and as soon as all of the fabric arrives, there will be a super awesome totally cool and one of a kind superheroine quilt starting on the Hello Kitty sewing machine in the dining room. A quick sample of one of the fabrics: 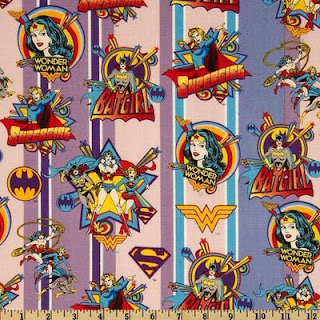 I have always adored Wonder Woman, so I'm especially psyched about this.

~About 2 years ago I managed to nalbind a red winter hat for my husband, which was quickly dubbed the "Zissou hat" because it was bright friggin' red and looked exactly like the ones out of The Life Aquatic.
I stumbled across the leftover yarn from it yesterday and have since started working to recreate a tinier version of it for Eve so she and Daddy can have matching hats. Daddy thinks this is the best idea ever.
I have no good photos of the project currently because the lights are so poor in the office where it currently resides. I'll post it later.

~I helped my buddy Heather (aka digitalnabi) with a lot of really time-consuming spreadsheet work, and moseyed up to her house to hang out and work on inputting some new info on her StitchSprouts website. This meant I got to learn a little bit about the inner workings of Wordpress, something I'd never encountered before. I also got to work on a Mac, which tickled my inner geek girl. And, of course, there was tiara-wearing to signal to my brain we needed to Get This Shizz Done which is always win.

What's awesome is that in the course of doing all of this I'm realizing a lot of things that I was fixated on, like that I feel like I'm not accomplishing anything, that I don't get out a lot, that I'm not learning anything new and I'm wasting my time now that I'm not at work... are pretty much contradicted by every photo and link posted here. So maybe this should be a weekly thing, to keep my head on straight about exactly what I'm accomplishing.

Also, in regards to previous posts, I had one of those moments where I enjoyed being wrong regarding what was going on with my friend. Everything's fine and I let my own mental crap get in the way. Both embarassing and amusing.

Let's do this again soon. And you guys can feel free to tell me about what you've got in the works, too, because I LOVE seeing what creative people can do.