Check Out This Thing I Found - Foodie Edition (Let Them Drink TEA!!)

Having not done one of these in a while, and needing badly to refocus on positive stuff and share with others, I have decided to talk about one of my favorite things to enjoy: Tea!

Now, if you go out on the interwebs you'll see that most of the world enjoys a good cuppa tea over a cuppa joe as a matter of cultural leaning. I do remember specifically being able to purchase ice cold oolong tea from vending machines halfway up the mountain at Fushimi Inari in Kyoto. Tea is ubiquitous, moreso even than Starbucks. Personally I hope it stays that way, too, as there is something slightly more refined and gentile about it. Perhaps due to the images of a proper English tea time we have here in the West, that elevate it to something more than simply a drink. Coffee, I think, is more utilitarian in purpose and is very taken for granted as Liquid Go Fuel for loopy office workers. I imagine in Japan it's probably the same way for tea, or thus have I heard stories told.
Also... if you do drink it a lot, you get to look thoughtful when someone asks you if you'd like some coffee then say "Noooooo.... usually I drink tea..." and then they'll start thinking you're one of those people that does decoupage, upcycles clothing, and doesn't ever watch TV.
There are sooooo many different kinds of tea available these days! Most far surpassing the over processed Lipton stuff many of us knew about in our youth. These days you can have organic dolphin free herbal teas, micro-farmed greens, ecologically responsibly harvested mate' teas... and it's all awesome and tasty. Except for rooibos. For some reason rooibos and I just never got along.
I'm not going to do a rundown of every type and subtype of tea out there, as there are some lovely blogs dedicated to that (I'll link them at the end) Instead, I'll share with you the lovely things I managed to discover as a tea lover over the years, and the ones I make heaviest use out of in my tea cabinet. And yes... there is an entire cabinet dedicated to tea and tea accoutrements in my kitchen.

First off, let's see our group, shall we?

These are the teas that I dig for constantly and actually think of as having specific times of days or seasons where they should be drunk. Some of them are favorite every day teas, others are those necessary to sip on after an emotional upset or during a cold. Others still are so reminiscent of the holidays or of memories in the past, that I drink them purely when I wish to feel the delicious heartache of nostalgia creep upon me. And truly, as I have just discovered, it is that way to an extent with all food items. Just some are stronger than others at pulling out memories with each sip.

Let's begin with the Grande Dame of the list, my super beloved Golden Moon Vanilla Jasmine tea.
When I realized I could not taste this last week, I cried. Literally. I love this stuff fiercely. It tastes finely of jasmine and vanilla, and has none of that fake perfumey flavoring you find in so many teas trying to seem "boutique" these days. 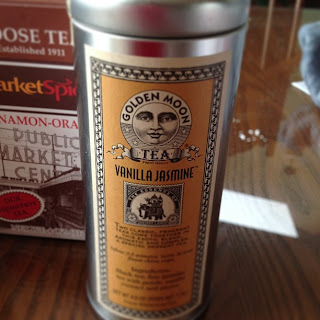 I first happened across this at a cafe near my house in Bothell, WA (north of Seattle, since nobody knows where any place is in WA except for Seattle and maybe Tacoma) where I met once a week with friends. At the time it was something that could only be purchased locally -as in THERE WAS NO WEBSITE. Remember what it was like pre-internet??- so that when I knew I would be leaving I found myself actually quite upset. I got together what little money I had left and bought a tin and nursed the hell out of it.
How much have I nursed it? Well... I left Seattle in 2004. I am now having to reorder a tin via their website for the first time since I left.
The leaves can be steeped up to 3 times, part of the reason it can last so long. It is also completely impossible to over-brew this stuff. I have forgotten I was brewing it and left it out on the counter overnight. In one of those "Fuck it, I need a drink" moments I threw it in the microwave and upon exiting it was STILL amazingly light, lacking any bitterness whatsoever, and did a damned fine job of getting my morning started.
If I had to recommend a black starter tea to anybody, it would be this thing. I start out my mornings with a hot cup of this doctored up with some turbinado sugar and some vanilla soy milk. It's also awesome just sipped on it's own with no additions, however.

Next on our list is another lovely discovered out in Seattle. It comes from a teensy weensy tea shop tucked in to the back corner of Pike's Place market behind the famous fish-throwing stand. If you went there, chances are you missed it, unless you were drawn in by the amazing smells that wafted from their doorway while ignoring the hollering fish hawkers tossing about frozen sea life to the delight of tourists.
If you manage to make it in there, you will find floor to ceiling stocked with amazing smelling herbs, spices, teas, some coffees, and every sort of device needed to release the flavor from those gorgeous plants. It is the Market Spice shop, and this was the first tea I had tried in 10 years that wasn't a Lipton tea baggy with a ton of sugar. It made me realize there was more to drinkable things that stuff pulled off generic supermarket shelves. Also specifically... the boy I ended up dating for most of my time in Seattle procured me a cup of Cinnamon-Orange tea on our 3rd date immediately upon finding out I was losing my voice, and it helped keep me talking until we ended our evening looking out at the skyline over Lake Union from Gasworks Park. 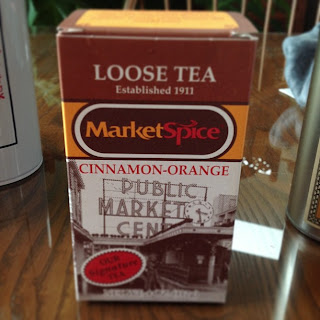 Even if I don't think fondly of the boy anymore, I do think fondly on this tea, and STILL use it whenever I have a cold. It is amazingly spicy and complex, smells amazing, and will open up your throat, your sinuses, or whatever ails you. It's also wonderful for cool fall or winter mornings. I used it quite often then as a pick me up. You don't need sugar, either, as it has its own built in sweetness. Should you love more sweet, though, it is of course an option.
As an aside, they also make one of the best chai teas I have ever had, called Spicy Seattle Chai Tea. I drink this stuff with honey and vanilla soy milk at least once a week. As a result, I am damn near out and need to order again. Be warned, it isn't that pre-mixed powdered stuff they try to sell you, or that sicky sweet pour-from-the-box chai out there. It will kick its way down your throat and make itself known, and I highly recommend it if you love your chais strong and peppery!


Next! My god, don't ask me to tell you what the canister says, I couldn't tell you. This is our only green tea in the lot, but it is also my utter favorite of all time. If I can go anywhere and get this type of tea to drink, I will be a thoroughly happy camper. 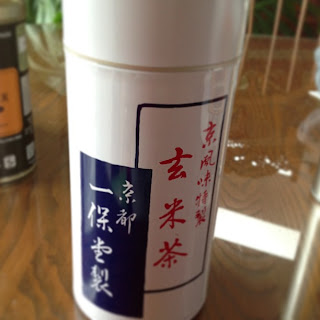 This, my lovelies, is known as genmaicha, or green tea with roasted rice. It is the proud product of Ippodo Tea out of Kyoto, Japan. If there is an easy way to get it state-side, I don't know of it.
When we got back from Japan I felt like I'd been somewhat cheated out of a long trip around beautiful Kyoto as well as a chance to really get in to some of the good tea they are known for there. So I ordered this directly from them, paid an arm and a leg, and received some amazing stuff.
Genmaicha is the stuff I love to drink during the day, when it is gray out, or when I need a "hug" from whatever I'm drinking. It has a lovely, clean green tea flavor without having the astringent taste of sencha. which is the green tea most people think of when you mention it. It is topped off by the taste of the brown rice, which probably gives off some sort of umami flavor to the whole thing and is what makes it so satisfying to drink. It's also a nice, non-harsh way to start your day.
Another thing of note, Ippodo's genmaicha can be reused 3 times, so you could have a pot going all day of the stuff if you so desired.
To put it in a nutshell, if all other teas disappeared from the earth and I was left with this alone to drink, I would be utterly fine with it.
Ippodo also sells sencha, macha (that lovely green powdered stuff that is used in everything "green tea flavored", as well as the tea ceremony) and Gyokuro, which is deliciously delicate, a bitch to brew properly if you're used to the more easy teas, and something I only pull out on rare occasions when I have 25 minutes to devote to brewing a small pot of the stuff for consumption. It is, though, worth it. They also have pots, cups and items for the tea ceremony if you're interested in that sort of thing.
Fun side fact, their website changes seasonally and features a black cat that wanders by on occasion. I really love that touch.
If you don't feel like having your tea shipped from Kyoto or can't afford it, most places with a decent sized tea section will also sell genmaicha, usually in a small can or box. I believe Rishi makes some.

And actually, you know what? This post is getting ginormous, so I'm going to split it up! Catch you in Part 2!

Ok I just want to comment on the first two paragraphs, because goes so show different worlds. I love both coffee and tea, mornings its a pot of coffee with a little bit of cream and afternoons its green tea. However if I told guys at work I don't drink coffee they would laugh at me and call me stuck up bitch, hippie/hipster, weirdo. Hell I get the bitter beer faces for telling them I don't watch T.V.

Ya I also miss the vending machines in Japan. Green tea was so refreshing in that weather.