I discovered that something that I've been feeling for hte majority of my life actually has a NAME. Like how the French have a name for everything (my favorite being l'esprit d'escalier.) except this is Japanese.
Mono no Aware.
Mono no aware (物の哀れ?), literally "the pathos of things", and also translated as "an empathy toward things", or "a sensitivity to ephemera", is a Japanese term used to describe the awareness of impermanence (無常 mujō?), or transience of things, and a gentle sadness (or wistfulness) at their passing.

Wikipedia has a whole entry on this stuff. I stumbled across it by accident trying to be a smart ass on Facebook about Japanese poetry forms (because I'm a haughty literate dipshit that knows there actually are multiple Japanese poetry forms.)
I think it's beautiful that this is an actual "thing", and that it happens enough that it has been given a title to describe the state. I am in this at least once a day, this small sadness for the passing of things.

In other news, I rescued a baby goldfinch from the sidewalk and took him to wildlife rehab. I got to watch him eat, and he sang to the lady who was feeding him like he sang to me. I'm so happy that he'll be okay.... I didn't mean to, but in my head I named him Oscar. 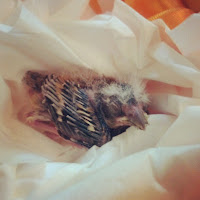 He's slightly non-photogenic in that picture, but he was so sweet and so tiny... I can't describe how small. He fell asleep in my hand and I could feel his little heart beat furiously and warmly.
And now he gets to be an adult goldfinch and the world is good for a little bit longer.