Fun with Making Things Do Other Things

Having finally given this away as a gift, I can post about the creative process behind it! The friend this was meant for stops by the blog on occasion and I didn't want to ruin the surprise, so it's been kept on the downlow. I feel delightfully sneak. ^_^


I enjoy Making Stuff. I enjoy it to such a degree that sometimes I will be walking along through some place as mundane as, say, Target and suddenly I see something..... 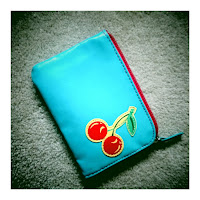 And my first thought is OH MY GOSH I COULD MAKE SOMETHING FROM THAT!

So I snagged it, (snagged 2, actually) and dragged it home to see what I could make from it. 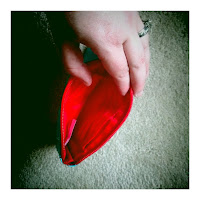 First things first, investigated the insides of it. Standard zippered pouch with an inside zippered pocket. Several tiered pockets on the other side for what normal people might use as slots for credit cards, library cards -if they still go to that- or ID, that sort of thing.
This is basically a fun night out on the town thing to carry in your tiny little bag, or just by itself..


My initial thought on seeing these things was that they would make a really neat miniature sketch kit, something you could carry around with you if you had minimal space for such things like a purse or carry-on bag.
I decided there were a few utterly necessary things to go in there for such a thing, and gathered them together. 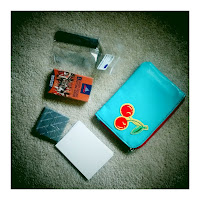 You needed the paper for drawing, obviously, a kneaded eraser of some sort(just in case you want to do reductive sketching, not necessarily because mistakes are anticipated!) perfect for being flat AND malleable, good old fashioned graphite for drawing, and then something else to liven it up a bit so it wasn't just a boring one trick pony. I couldn't locate a cheap small package of colored pencils, so I went with the old standby of conte crayons and charcoals. Anybody who's done a handful of art classes has probably come across these things and used them for the sketchenings.

So the next step was simple. Construction. 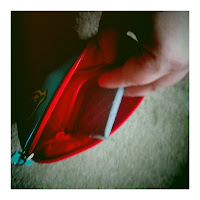 First we added the kneaded eraser in. Because of the potential for it to moosh everywhere, it got the place of honor in the zippered pocket. 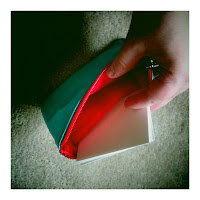 Next were some ACEO-sized sketch paper, slipped in to those handy card-slots on the side. If I'd had the time or imagination, I would've put a few different kinds in there, one for each slot. As it is, this was a good all-purpose sketch paper. If you can't locate that, and the pouch is big enough for it, one of the miniature unlined moleskines might do well. I did contemplate that for a while before going with the ACEOs. Moleskine paper isn't the greatest and that was the tipping point for me. 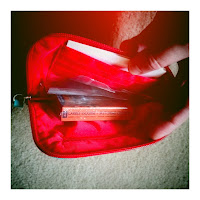 And then finishing this bad boy up, two very small graphite sticks in a small ziploc baggie (2B hardness, if anybody cares, since that's a good middle of the road sketching quality) and those colored sketch sticks in white, red and charcoal. It all fit very neatly in the middle. I was grinning like an idiot when I was done.

So the finished product came out to be only perhaps half an inch thick when completed, meaning that it would do really well as an unobtrusive art kit. My goal was to have something portable and thin, and this was it!

A few additional things I thought about after the fact:

~Adding all of those different types of ACEO paper to the slots. Mental note to label the slots so you know which paper you're pulling out.
~A very tiny watercolors kit, of which there are several on Amazon.com and Dick Blick. You would sacrifice some of that slimness, but if you're mostly just worried about square footage being taken up overall, then no problem. I imagine you could play tetris with everything and fit it in without too much added bulk. The Windsor and Newton set looked the most promising for this.
~if you add the watercolors, you have to have watercolor paper. Adding the watercolor paper ACEOs makes more sense now. Conversly, you could try to find a mini moleskine watercolor paper notebook. OR... you can whip up your own by cutting up good cold press stuff in to small pieces to slide on in here.
~slightly more bulky, but they do have colored pencil sets that will go in there. I couldn't do it because it offended my sense of aesthetics to have it sticking out, but it will certainly work for others who are less particular.
~willow charcoal could be snapped in to smaller sticks and stored in a small ziploc bag like the graphite.

There's other stuff. But I think I need to put this project to bed before it goes too crazy. I enjoyed making it, and the friend enjoyed receiving it. I have a matching one of my own that's nifty that I can keep playing with if I want. In the end, that's the important stuff. 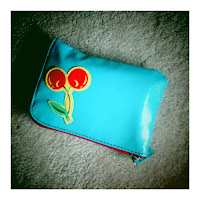 Labels: artz, check this thing, I made this