There are times when it generally suits one to make lemonade from lemons. After all, we have all had those moments where everything we planned fell to ruination at our feet and there wasn't much else we could do but laugh and keep going. It makes for more interesting and fun moments, too, than the ones so carefully adjusted for.
Today I bring two kinds of lemonade because boy howdy don't we love a good dichotomy here on this blog!
The first? A personal lemonade moment, born out of Just Not Fucking Paying Attention.
Behold. My Sky Scarf as it stands this afternoon. 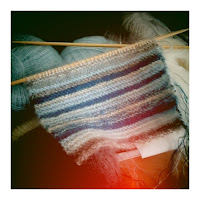 Now as you can see immediately I took this thing with Vignette, so it's all artsy-like and has a big damn fake light leak in the lower corner. But the details are still there ad the color is still true.
Second thing you will notice is that it looks a little funky up at the top there. That, my friends, is where the JNFPA kicked in while I was knitting. I had gone so far as to cleverly pair up the light gray yarn with the light blue yarn, as it was a lightly cloudy day with just hints of sky poking through. I was knitting along merrily (and with a bit of exhaustion) when I suddenly realized I had stopped doing garter stitch and dropped to stockinette.
Oh crap.
And this stuff is mohair.
Oh crap. You can't "unknit" mohair. You can forcibly separate it from the rest of you piece with a lot of angst and swearing, but you don't unknit/unravel/unwhatever it.
I was prepared to be very, very upset at the entire thing and even moreso at myself for being careless when something dawned on me...
1. The colors together were so delicate that you weren't going to be able tell what I'd done unless I had accidentally knit and then purled the rows.
2. It was the Spring Equinox.
And thus, I hit upon the marvelous idea that, in order to give an idea of where the seasons were, I would knit and then purl the 2 rows on the days of the solstices and equinoxes, to give the scarf a bit of a way to tell time without counting rows.
Lemons to lemonade... done!
And it actually looks rather awesome to boot.
And in this instance, deciding to take something that was not entirely as planned, not how Things Are Supposed To Be and making something rather nifty from it. Or at least ~I~ think it's nifty, and adds a dimension to the scarf that wasn't there before.
There's ways of Doing it Wrong, though, and that will be explained next.
Posted by Red at 2:53 PM