I should be asleep but you know what? I am being a rebel and staying up after my totally artificial, self-imposed bedtime.
And why, you ask? (or don't, I'm sure some of you don't care, but hey, you're here so let's be thorough) Because I want to talk about something. Something that has been bugging me.
The house? Oh yeah. I moved in. We have blue walls in one part. It's awesome. I'll talk about that later, probably in a post talking about how my life used to suck and how now it totally DOES NOT.
AHEM.
Smash Journals.
For anybody not familiar with them, a video. I'll wait. This is important to understand before we continue. 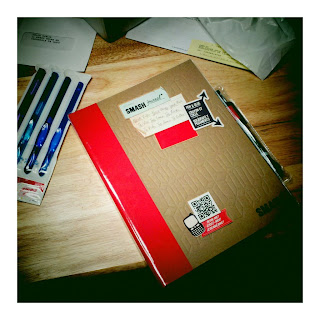 Yes, it's red. Of COURSE it's red. If it hadn't been that one, it would've been the lime green and I couldn't stand the lime green because it said "eco" on the cover and the only thing inside were a bunch of pictures of leaves and trees. Yeah. I'm sorry, but nature pictures do not an eco journal make.
I've already filled out a few things in there, including a little blurb about how baseball is probably the easiest of the sports to transpose in to coding terminology because every single action within the game relies upon the pitcher's processes..... I should probably flesh it out better in a "regular" journal where I can actually whip up some pseudo code and I'm not dodging their pre-printed crap on the pages.
Which brings me to my single complaint about these (besides putting themselves as "specialized" when it's pretty much artificial). They printed words all over my front page. A giant blurb talking about how hard it is to start a journal, so they would take up the front page. Really? Did I just drop money so you could take up the beautiful promise of my front page? Nuh-uh. I will be covering up the majority of that page in stickers and words that are mine. Because you know what? I know how to rock a chaos journal and damnit that is MY front page! Plus it needs dinosaurs in there.
Actually, my plan is to put dinosaur and unicorn stickers all over any place they have pre-printed words. Cuz I really hate being told what to do and that's my impetuous 3rd grade self coming out.
I'm looking forward to this little experiment, to see what happens now that I've been given "permission" to journal in it with my usual style. It's a mini-experiment along with all the others I'm running in my other blank books.
And if you're still reading, WOW, thank you. This was long winded but I haven't had a good brain dump in a while -as you can probably see. So the smash journal maybe will be two-fold in its creation, which is awesome.
Now if you'll excuse me... I need to go find my dinosaur stickers.
Posted by Red at 10:15 PM