It was spectacular. Not in the bright lights and red carpet kind of way, but in the way that a lot of people who love their camera and love the images that come out of it can be.
It was a narrow building, with wooden floors painted gray and squeaking like walking across the backs of an army of rats with each step, slightly cantilevered and very aged. Not dirty, but sagging a bit, like a man with years on him might do once he finally gets to take a seat.
I didn't know about the policies of taking photos in the gallery itself, so instead I just took pictures of their super-awesome bathroom. Wall to wall photos of family portraits and wedding photos, all in different frames and different sizes. Not an inch of wall was spared and it was one of the happiest places I'd sat in in a while. Behold: 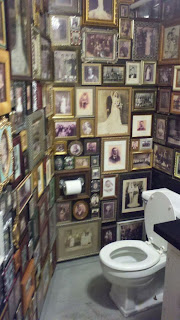 And while New York City is known for its drive to be innovative, hip, new.... it really felt to me that this place was put together not with people who were trying to corner the art scene and be popular, but by people who seriously, seriously loved images and the moments frozen inside them.
I got to shake hands with Sandra Carrion, who was as nice as could be and seemed happy that I'd made the drive to come see the exhibit. "Sign the poster in the front hallway before you leave," she requested, before disappearing in to the office to talk with a gentleman named Larry, who'd been nothing but warm and hospitable from the second he heard us creaking on their floor. Larry, in fact, tipped her off to my presence and she came swooping out of the office to meet me immediately upon learning of my existence.
The walls were a very pale grey, perfect to offset the images inside. And oh, the images! I've listed the link previously if anybody wishes to take a virtual tour and see all the gorgeous low-fi images on these walls.
Initially I'd been struck nearly dead in fear that the way I'd chosen to frame my photo would show off my status as a mere passionate hobbyist... but upon entering I realized that I'd set it up pretty well on-par with everyone else. Perhaps the worst I saw was someone who had printed the photo quite large, then dropped it, unmatted, in to a shadowbox. It leaned against the top of it and slopped to the back, and even knowing it was a few moments just to get it in a frame so it could be displayed, it didn't detract from the impact of the image. All of that was just icing to the cake, and it wasn't necessary.
What was most wonderful for me was discovering that at the same time as the Krappy Kamera exhibit, there were two others running -one of photographs taken by members of the Soho Photo Gallery via cell phones, digital cameras with Lensbabies (oh how I want one!) and regular cameras one would expect to find in a lomography exhibit. I loved every second of seeing what people could do with something that didn't produce a crystal-clear image with hard edges.
The other exhibit I almost swooned at... for it was about 20 images from Michelle Bates, She Who Got Me In To This Whole Mess In the First Place. Her book "Plastic Cameras: Toying with Creativity" was the thing that set my imagination on fire with the possibilities of what could be done with a little plastic box. I thumbed through the pages of that book and looked at the beautiful, hazy silvered imaged that promised to find the magic out there and properly put it on film in the way my beloved Nikon never could. We walked along as I talked about the book and pointed out images I remembered from it, talking about what she'd done with exposure, bulb settings, etc., to get that effect in the image. It was, I imagine, much the way some people feel when they walk in to Graceland. I was in the presence of somebody who loved plastic cameras as much as I did, and the images winked playfully at this secret as I walked by them.
I kick myself now for not checking things, as she was actually giving a talk the next day, long after I would be gone from the city and even from the state next door. To hear her talk about her explorations with it would've been something just amazingly awesome. Ah well, another time. 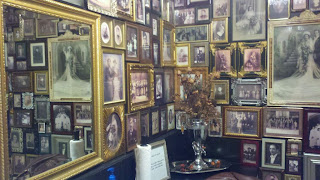