Arthur.... and Clancy. The Project.

With the success of Arthur, I decided to introduce a cousin of his to the mix so he has someone to have shenanigans with since I am often not available (I'm just there to photograph the aftermath). Thus Clancy O'Hare -yes, groan, groan LOUD!- entered the spotlight yesterday. Clancy is bright damned yellow, because I figured there needed to be a definite difference in the two... and they didn't have any blue beanies left, just pink and yellow. :(
(Although to be fair, I attached the color yellow IMMEDIATELY to Clancy's name when I thought of it so... hey, who knows why our brains do these things, right?)
Folks showed immediate interest, which really helped bolster my hopes for how this project might go down -for, lo, it hath now become a project. Yes indeedy, I have this going both as a study on human reaction/interaction and as a storytelling project. What's the best part is that I never intended for this to become something I focused on, but I do find myself trying to compose something fun every day for people to read about our intrepid little rabbits. Like it's my job, almost!
I will not divulge the fullness of my plan yet, as some of the folks who it might involve read here (sorry to be so vague and MWA HA HA HA!! about it, guys) and I want a chance to let this develop and see if I can truly accomplish with it what I want to. Clancy, after all, has a much bigger purpose than he could envision when he stepped off the train to say hi to Arthur.
In fact, I am pondering the state of the project and I think perhaps in the future in order to stave off the destruction of the suspension of disbelief for these two guys, this may be the last post I make about it here. I feel like it's important to maintain this mini universe for the time being. Although there might be funny pictures of rabbit shenanigans posted, as I have lots of plans for that!
I do have to say... I knew everything was working when I got in to a conversation about Clancy's arrival and mentioned getting them a bottle of Scotch. The response was "Oh man, you better watch them, that'll mess them up!"
It was at that point, when someone made an empathic jump from their own experience and applied it to a potential condition of these two little guys -who, let us keep this in mind, are INANIMATE OBJECTS- I knew that something really awesome was happening. People are just infinitely cool and have not yet ceased to amaze me. It's a source of wonder to watch people get on board with an idea and follow it ot fruition, adding their own energy and excitement along the way. 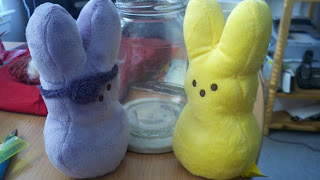