After running around several states taking pictures of things I managed to finish the never-ending roll of film in SakuraCam!
By several states I mean my house, then on the way back from CT in Easton, PA, then in Harrisburg PA... it only seems like several because we drove through so many states before the roll was done, to clarify.
They came back from the drug store and I must say that after playing with them, I can see some real potential with it, but that it will only turn out good images if I stick with very specialized settings.

For instance, in this is a shot of my front porch. It took a very wide angle, catching up under the eaves (which I had not intended) and grabbed every color it could. But it also washed the blue-reds out of it. The butterfly bush I was taking photos of has distinctly dark purple and indigo flowers, and in this image they appear almost crimson. (Click the image to take a closer look.) This became a trend as I looked through the roll.
But with that in mind, and noting that it tended to wash the sky out to a bright white even when the camera was pointed straight at the blue, I continued through and began to see other features of the camera.

It most definitely possesses the dark vignetting so prized in toy cameras, though not to the degree that I had hoped or seen on other photos using the same model kit camera. It does have a beautiful hazy edge around the outside, and only the very middle is in sharp contrast. This could lead to a lot of very awesome setups in the future if I have the right panorama to take photos of.
As I looked through the photos, I began to realize that the camera was capable of capturing very fine detail, even if it was washed out and hazy around the edges.

For instance in this image, the picture was taken through a screen door and you can see every square very clearly. You can also make out a lot of detail of the landscape beyond. I enjoy this picture because, as Bob put it, it has a very "Matrix-y" feel to it. It reduced the back yard to colored squares, and the unfocused nature of it made this combination possible.
In the future what this camera will be used for is areas of high detail, landscapes, cityscapes, and anywhere that a lot of detail or a lot of space could be captured. It would look spectacular with black and white film, and I already have a roll of it in there already.

Without the color to distract, the vignetting and blurring will come to the forefront as details and would work nicely for that.
I could easily see this being used with 100 speed color film to catch some glorious and beautiful details, as even 200 speed seemed to be a bit too "tight" (I can think of no other word to explain the look) on the edges. With how much light it lets in, I'm betting that it would do well even on a cloudy day. I intend to try it out myself once I have a job and can afford to mess around with film again.
All in all I'm glad to have gotten the test roll out of the way. Some of the images were very bland and boring, and I know that, as with all plastic cameras, sometimes even the best framed image will end up boring and washed out or ill framed, and I just accept it. But now I know what I'll have a better shot at with the camera. I can't wait to take it with me to OCNJ, OCMD and Maine to test it out.
My closing image- one of my favorites captured on this roll of film, the colors are almost entirely true to life. The Artists' Alley in Easton PA, behind the Crayola Factory (ya rly): 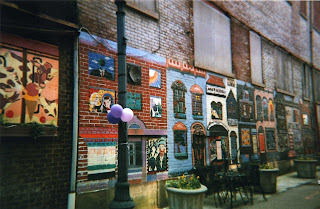