I've decided it's about time I put yet another entry here that has nothing whatsoever to do with goal setting or anything of that sort. It probably won't be educational, uplifting, or anything that the reading of will result in great catharsis, enlightenment or laughter. Mostly because I'm feeling very clever with myself and wanted to share what I've done with my newest device this morning. 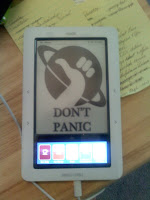 I got a nook. It is awesome.

And so is the wallpaper I've put on it.
Hearkening back to THIS particular strip on xkcd, upon seeing it I decided that I absolutely had to download it and use it.

A few other things found - Pip Boy, a covenant elite, some random lotus vector art and a lovely shot of Yosemite Valley. I may convert or make some of my own artwork for the wallpaper in the future, but thus far the flickr group and the nooklook.com folk have done a fine job of finding something awesome. 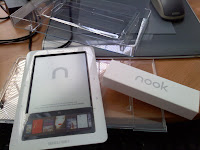 Compare the current wallpaper to how it looked out of the box..... boooo-rrriiiiinnnng....

Thus far I've really enjoyed playing around with it. The major selling point was discovering that my local library will actually lend out books to it for free using an eReader program. Being that I just got my library card (still feeling awesome about that, actually) I can put it to use via the eReader downloadables program. How cool! That and they might have a few titles that aren't easy to find on Barnes and Noble's interminably difficult to navigate site, so this is a plus. This is, in fact, what sold me on the idea. I'd been thinking about how libraries might survive the death of print and had been seriously pondering trying to find a way to integrate eReaders of all types with the libraries. After all... if you donate $$$ to a library and they have a deal with, say, Amazon.com or BN.com, they could get a ton of books. No worry about shelflife. No worrying about a lack of returns. But also no elderly women behind a counter in an older building surrounded by the cloud of aging paper smell that goes along with the awesomeness that is a library. There'll always be a need for print. After all, who wants to take their $300 device out on to the beach where it could be stepped on or stolen? Or if someone ends up somewhere that they can't charge the battery on the thing, or they're out of range to download books (or worse, they're somewhere that can't do it at all because the books are in a foreign language). Always, always there will be a means and reason for pulp.

Ours, named Ms. Marple (for all devices in this household that are gadget-rific are named) currently has Edgar Allen Poe, Bram Stoker, and Jane Austen on it. Downloading free from Google we also got our hands on Anne of Avonlea, Beowulf, the Kalevala (I've always wanted to finish reading that) and a few others. Also downloaded The Lovely Bones, which I've wanted to read for a while -well before the movie came out, anyway- and a few other things. Sadly, HP Lovecraft is not in the public domain but we'll be putting him on there as well. If it can make the transition, I want to put Mark Danielewski's last novel on there, too.

I've really enjoyed setting it up and working with it. The possibility of listening to music while reading, or sitting back and listening to an eBook on it was also very appealing. I have several Buddhist tomes I purchased that I need to go back through and listen to. I think later today I'll be setting them up on Ms. Marple so they can be listened to.

As much as I would like to pack it and take it with us to Boston (ohhh the long train rides ahead of us!) we don't have a protective case. They don't have any cheap ones available, and the ones that ARE will come to exorbitant prices of $65+ just for the privilege of not cracking the eInk screen. I shall run the idea past Bob and see if he thinks we can take good care of it in Boston. Otherwise, I shall be bringing the PSP, the DS, a knitting project, and a sketchbook. Oh, and a lomo camera, though not sure which one. I think photographing Boston in b&w with the Holga might be grand, though!

As always, I am grateful to they that listen to me ramble and share in the excitement of shiny new toys in my life. My dog snores at my feet and I am also a bit woozy from the illness I'm still fighting off. Methinks it is a good day for R&R....and reading, of course.
Posted by Red at 10:35 AM