The Continuing Saga of Me Doing Something Else With My Life

A few quick updates -
My "Miffy Box" showed up last night. There will be pictures forthcoming and you'll know what I'm talking about. I'm a little bummed it ended up being gray and not light blue like in the picture, but I'll live I guess. *SIGH* It's adorable, and exactly what I need for lunch. Maybe too much, in fact.
Zen is still awesome, but farts a lot. We think it's the generic milkbones he's eating, so we're going to cut those back and pray for fresh air.
I'm missing all of my friends spread out all over the world right now (why IS it that they're all 50+ miles away, anyway??) and hoping I get Xmas gifts to them in time. Most worrisome contender? Japan. Yeah. It's not going to happen. *sigh*
I redid the 2 Hopeless Gaijin's color-scheme so it is now 100% less likely to ensure seizure while reading. It's now a very calming shade of green, and I'm going to leave the .xml and javascript to the pros out there. I'm finding the film spool a bit more difficult to wind in the Diana than the Holga, and I'm not sure if it's because I'm not used to it or because the film is off the spool, but we shall see shortly enough. Having to reach that far forward for the shutter button takes getting used to, but overall I think I like the format. Mostly I love the red light that begins to glow like something out of Battlestar Galactica on the back of my flash when it's ready. Or perhaps more appropriately, like one of the turrets in Portal. Because with the white and chrome, that is exactly what it looks like.

How cool would it be if my camera came to life and starting scanning around with lasers, calling out "Hellooo? Is there anybody theeee-eerrree?" Except for where I wouldn't have a Portal gun and I would have to bitch slap it off of wherever it was sitting, only to dodge bullets as it shoots wildly, then dies....
Okay, so maybe not so awesome in that end part. But it would be awesome on YouTube.

That aside, I've been doing some research in to what can be done with Holgas, Dianas and a beautiful roll of IR film with an affixed IR filter. I think I might try to work with that next. IR film can be rather expensive, and thus far not easy to obtain. I found a few auctions on eBay with it in 120 format, but I'll have to hang tight on it for now. We've got a lot going on and I can't be shelling out $8 for a single roll of film. That's before the IR filter and the jump ring I'll need to afix it to my Holga. I'll also need to find out a time and place to do IR photography because it requires being totally still to work while you expose the frame for several seconds, and that means carting around a tripod. I still ~really~ want to try it, though. 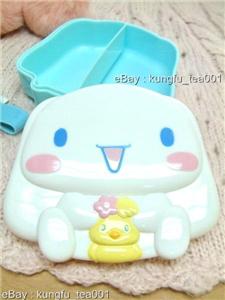 I've begun winding down on my acquisition of bento items for the making of lunch. My one remaining problem is that there are so few "masculine" items for bento. I'm going to guess that's because men don't tend to want cute or creative things, they just want a box with their food in it, and then eat it. It's the women, and the children mostly, that drive the industry. So I think at some point Bob will have to deal with opening his lunch bag to find Cinnamoroll staring up at him with a plastic molded belly full of chicken nuggets or something for him. I really don't want him to take a hit on the macho scale, but if nothing else is clean, he may just get sent there with it. Of course,I'd have to have one first. So now it must be purchased (I was looking for an excuse anyway)
I've noted that I'm actually tending to organize lunches so they even present themselves better when being pulled out of bags, or when you open up something like our tupperware, and this amuses me. There's no reason for a lunch to look like slopped-together ugly if you have 2 extra minutes. I'm proud that it's snuck in unconsciously and started to affect how I set up even leftovers.
There's actually a few items coming aside from the "carp" Bento I'd originally snagged for him. It's very, very cute, but also very, very small. I can slip other items in there with it in separate containers but in the end... really... I'm OCD and I need to have a SET for him to eat from. It pulls the whole thing together. Thankfully, a set is coming. It has Totoro on it. And I will get a matching "girlier" set so we can have his and hers Totoro bentos. It is amazing that I can do stuff like this in the middle of a recession and speaks to my good fortune as of late, really.

Finally, and probably most important, something huge happened today. About 5 years ago I slid across a double yellow line in an ice storm. My first car I'd ever owned was totaled and I bought a new, minimalistic economy car to get me around in the world. I looked at the price tag on the loan and thought oh god, I'll never pay this off...
This morning I dumped the finally few hundred in an account and closed out the loan. The car is mine, the title is mine, and the last of my old debts are paid off officially and forever. It also means that somewhere I managed to earn and not spend 15k to pay for the car, and that's huge. Everything from here on out is me standing on my two feet moving forward. It feels indescribably awesome.

My next quest is to find an mp3 of "Unthought Known" by Pearl Jam. It seems to not be available if it isn't on iTunes. I hate iTunes for no rational reason, but have the helpful argument of not owning an iPod to use with it. It's good to have little things on the agenda for the time of being.
Posted by Red at 12:45 PM